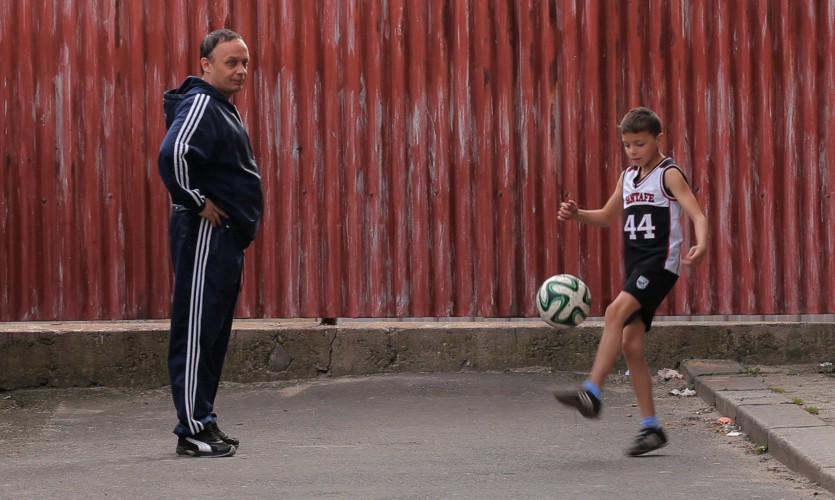 Patrik and Pavel are the central characters in this portrait of Romani life in a small Czech town. As coach and assistant coach of a mainly Romani football team we follow their day-to-day lives in this very open-ended documentary. Racism and sport are in sharp focus in Europe as the continent tries to unite whilst divisions are exposed everywhere. The politics of race relations are contrasted against everyday differences, class struggles and violence in this beautiful yet subtle reflection on identity and sport.

If you’ve played in an amateur club you know that getting the team onto the field can be the hardest task of all. After that, making sure everyone gets along can be equally hard. This is the giant obstacle for FC Roma, a team of Romani football players that everyone in the Czech third division is refusing to play.

When they do finally get onto the pitch football itself plays second fiddle to the conversations and heckles that pepper the sidelines. Overlooking an idyllic Central European vista, we get our introduction to the team. The deep divisions that the Romani people face are captured in expertly recorded moments exposing horrendous slurs dealt to the FC players from the boundary that one wouldn’t imagine could still exist in a country with the Czech Republic’s past.

Filmmakers Rozálie Kohoutová and Tomáš Bojar have focused on intimate access over contrived drama. There is no soundtrack and very little of the typical sports montage one might expect from a film about football. In fact, football isn’t really a feature of the film but more the moments of anticipation and release. The coaches’ screams and the post-game embraces. Bojar and Kohoutová have done an amazing job of shooting the inherent beauty in the landscape which is stunningly set against dated racial attitudes and bleak suburban architecture.

Race and racism are the central themes, far more than football. Even though the team performs well on the field, their greatest obstacles are battling to find opponents. Phone calls and meetings with opposition, battling prejudice because of the racial representation of the team. The camera follows Pavel and Patrik through their everyday lives as we learn about their aspirations to lift the spirits of the Romani community through football. Patrik is a garbage man, a statuesque figure who seems comfortable talking with his colleagues about their prejudices in ways that are endearing and humorous.

This is a stark realist work, it gives a unique insight into everyday life in the Czech Republic. Humour and ridiculousness are dealt out in equal parts alongside the bleakness of everyday life. FC Roma will not replace your EPL fix for the week but it goes a long way to solidifying the notion that we are all equal on the sporting field, even if hopelessly so. 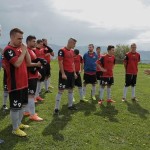 Joel Zika is a Melbourne-based animator, artist and educator. He works with new formats for narrative and popular entertainment. He has shown video, animation and print works at festivals around the world and his artworks are held by public and private collections across Australia. Recently his work was featured in the book New Romantics: Darkness and Light in Australian Art alongside other artists Bill Henson and Tony Lloyd. Joel Lectures at Deakin University in the Screen and Design program.